I guess I should start blogging again, if nothing more than to stop all these people trying to post whatever the internet equivalent of junk mail is called on my comments. I think it's junk mail anyway. Although, they haven't been quite so diligent since I started moderating comments over a few days old.
Anyway, it's been a very yarnie week.
On Saturday I ran into this simply magnificent weaver who keeps turning up different places I go. I got to see her studio briefly and she showed me the weaver's knot. It was very inspiring. I ran home (well, not literally) and finished tying on my dummy warp which now looks like this: 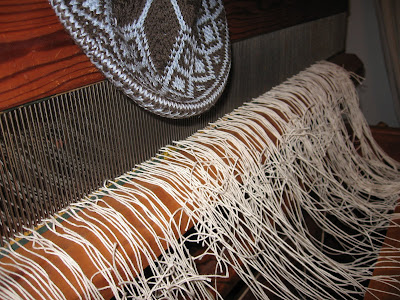 I also stuck my new hat in the photo. I finally finished it. Remember some of the woe it created? I didn't take it off for the entire day except to photograph it.
Arthritis in my thumb has determined that dummy warps are not for me. Even with a brace on my wrist and thumb, tying all those tiny knots is extremely painful. Besides I really enjoy threading the heddles and slaying the reed. I think I like that part better than the actual weaving. I certainly like it better than trying to get the warp tension even.
Before all that happened, I saw this spinning wheel. It was a poorly maintained, light weight, double drive, Eastern European (Hungarian), castle style, flax wheel complete with distaff. It's exactly what I've been looking for for years. Only, I couldn't afford the asking price - which was more than reasonable. Any price I could offer would have been insulting. So I displayed my enthusiasm and told the owners (who knew nothing about spinning) all about how it worked and the social-economic position of the person who would have owned a wheel like this. Then I told them that I couldn't give them a fair price for it but if they don't sell it and they are willing to part with it for what I could pay, give me a call. I left my number. They called that evening. I got it. I even risked missing the premiere of the new Dr Who series to pick it up. 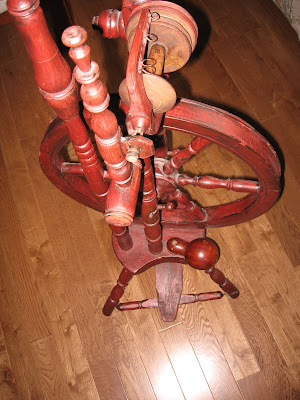 It's not very photogenic at this stage.
We managed to scrape the glue off most of the parts that should move. I've washed off all the dust and most of the gunk. It has a rather poor overcoat of paint on it, sort of bright red with a black wash to make it look older than it is. You can see some folk art underneath the paint and there are a few places where the original brown lacquer shows through. I want to find a way to wear away most of this top coat and show off the different layers of history. It looks like it use to be used but hasn't been since being painted red. I'm told it's over two hundred years old, but I doubt it. It is funny though, the different components don't match each other. I wonder if it was made from something else. Like a chair or a wagon. It's a fascinating wheel.
The bobbin it came with doesn't fit the flyer assembly. But just the moment I was thinking of phoning up my friend who's husband has a lathe, she turned up at my door to borrow some shuttles. Perfect timing. I sent the flyer assembly home with her and offered to exchange some farm goods for bobbins.
As for weaving, it's finally raining so I can wind on the warp and when the shuttles come back in a couple of days, I can finally get weaving that rug.
Posted by TrampledbyGeese at Tuesday, April 20, 2010 11 comments: 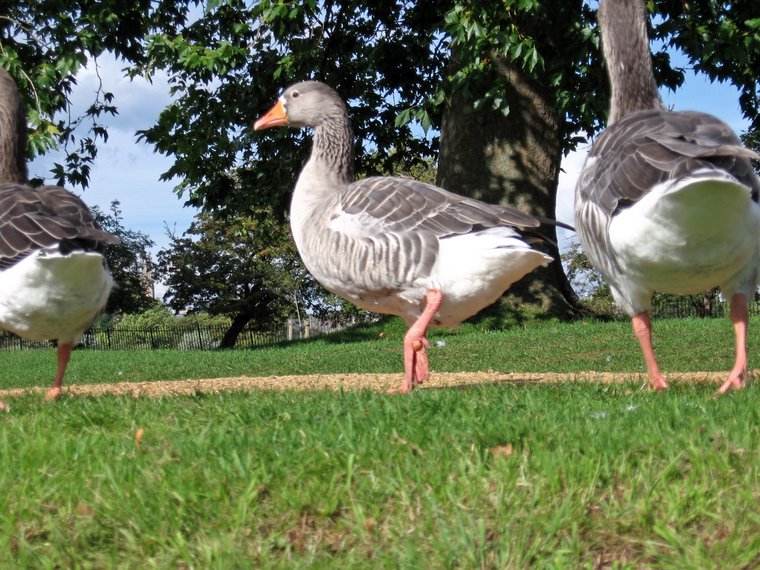